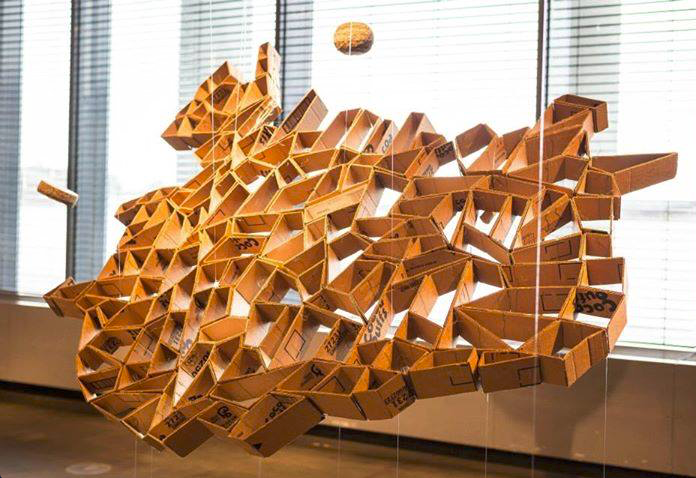 Atli Vidar Engilbertsson lives in Akureyri is a versatile writer and artist with a unique style. His career spans a long period of time and in a variety of venues of various art forms. He has attracted a lot of attention including works made of paper, but also engaged in composing music, drama and various writings.

Atli showed the Art Without Borders 2012 last spring in the Institute of Culture and Arts Hafnarfjarðar with a good reputation. Works Atlas will adorn all promotional lists without Borders 2013 will Atli show new works on display in the hall of Visual Arts Society of Akureyri in the end of April. This was announced at a press conference spaces in Akureyri today.

Ólafur J. Engilbertsson brother Atlas, wrote the following text on the art of Attila and his career as an artist:

Recovery has traditionally been a recurring theme in the work of my brother Atli Vidar (b. 1961). What struck him on the track of their time, guidance Kristin Victory March daughter to knit expressions in Crafts era in secondary schools in Reykjanes Fjords.When they returned home, went Atli using bales tape and string to make knit works and collages made of cardboard, not the other materials have. He showed knit work for the first time publicly on N-Art, Nordic exhibition in Eimskipafélag damaged Borgartún summer 1986. colorful knit works was established in big Indian tent was made of black plastic bin liners. Atli also used corrugated at this time in their work and did quite accurately implemented model of town our parents, Tyrðilmýri on Snæfjallaströnd from corrugated he painted with acrylic paint. By this time Atli to experiment with varied forms artwork; sculptures, furniture, murals and geometric paintings he exhibited at the Museum and his old school in Reykjanes deep. He did not use any musical artist outside of which he enjoyed a brief period of Crafts hours in Reykjanes, but interest was truly exist.

Were revolutionized the art process Atlas Niels Hafsteinn in Safnasafninu on Svalbarðsströnd invited him to exhibit in the museum in 2002. Atli showed carton art and snærisskó and Safnasafnið bought him work. This meant that Atlas was invited to participate in a multinational exhibition Textile Society of Things in 2004 where he showed the shoes of rope and baling control. In 2007, he participated in a group exhibition in Huglistar Safnasafninu festival Art without borders and also in a group exhibition of artists with mental illness in Rosenborg in Akureyri. Atli continued to work from the egg trays and made including props from the show for multiple lists Valhalla Bank of Akureyri in 2009 and a carton of his works was selected to adorn calendar dump that same year. In 2011 created Atli so brain corrugated family and showed the Safnasafninu. It can be said that there was recycling his art reached new heights.

Since Atli is mostly self-taught artist is folk art in mind. Many renowned folk artists of our painters have either been made or two-dimensional works in wood or other materials.But Atli is more rooted in popular culture and diverse consumer culture. He is self-taught fjöllistamaður, has written poetry, plays, short stories and composed music as well as his art. Their work has always issued ones, music on cassette and Writings photocopied the copier. It can be said that Atli is an artist born in wedlock offspring consumer despite having grown up in a remote farmhouse. He has dedicated itself to recycle derived from packaging and stash and use art and he has used the tools of consumer society makes the latter to bring art and views across. Strong sense of form and content characteristics of Atlas as the belief that no content is above another. It can connect his art with the crisis by efficiency and care are factors that he made. However, in my opinion, the main theme of art Atlas anybody can flourished in art, whether he has the qualifications or materials, everything is possible and nothing stops the creative mind to find its direction.

Art Without Boundaries is an annual festival focusing on the diversity of life. In the spring becomes the tenth festival set on 18.apríl but every year is selected artist festival each work adorn promotional festival that year. Isaac sat Sævarsson was an artist of the festival in 2012 and showed his work at the Nordic House. In 2011 it was Gudrun Bergsdóttir embroidery artist who was nominated and she exhibited her work in Hafnarborg in. The jury this year were Unna Mjöll S. Leifsdóttir representative Reykjavik Art Museum, Daniel Björnsson representative Kling & Bang gallery Isaac Oli Sævarsson artist festival in 2012 as well Sævar Magnusson.

During the festival, artists work together to art with diverse outcomes. It leads to a richer society and to increase understanding between people. The festival is a platform events. It is dynamic and alive and is celebrated all over the country. The aim of the festival is to increase the accessibility, diversity and equality in cultural life. Providing list of people with disabilities communicate and establish cooperation between disabled and non-disabled artists. Visibility of different individuals is important, both in society and in public debate and has a direct impact on gender equality in all areas.

‘Paper my art I’ve been creating since 2010, and the work has been a great self-help mental illness in my many years of depression and anxiety disorders. I’m back in full work energy in a day or even 150 – 300% energy work with paper art.’