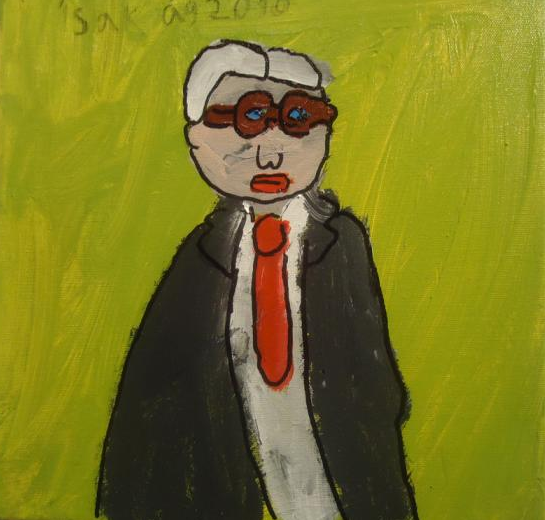 In 1995, Isak and his family moved to an apartment, in order to be close to the school Isak was attending.Isak could walk to school and was able,  as much as possible, to be just one of kids in the neighbourhood. A man called Halldór also lived in the apartment block, and he had lived there since 1956. Isak was six years old when we moved and Halldór was around seventy. Despite the huge difference in age Isak and Halldór had a beautiful friendship. They spent many happy hours together and Isak painted this portrait of him. Sadly,  Halldor died in 2009.

Isak Óli is autistic boy living in Reykjavík. He was born December 15, 1989 and was diagnosed with Autism when he was 4 years old. Ever since, he has received excellent training. First nursery Gullborg on Rekagranda then moved to Alfheimar the corps for autism was established in Langholtsskóla. It was much fortunate move, since it took him a long way in the coming years. There is a great staff that much thanks. After primary school he enrolled in the comprehensive Garðabæjar. Since we took a good time where Isak flourished as never before. Art talent had to fulfill their potential and decided to focus on these skills. He graduated from FG spring 2009, we said goodbye to the staff there with great reluctance.

Isak has held several exhibitions of his photographs. First in City Hall where his art attracted considerable attention in the art without borders. In spring 2008, he then created his first solo exhibition in Gallery Prison and was sold out in just two days. Isak paints the protagonists of the books that have been read to him. In the beginning he drew constantly Smurfs and Paper – Peter, but these characters are a great favorite. We have always kept the drawings and works, but it was that the amount was just simply too much. Halla, mother of Isak, decided to start buying frames and let him paint these characters because it takes more time and work fewer and with lighter with storage. By the time we get him going to draw and paint more characters he draws and creates.