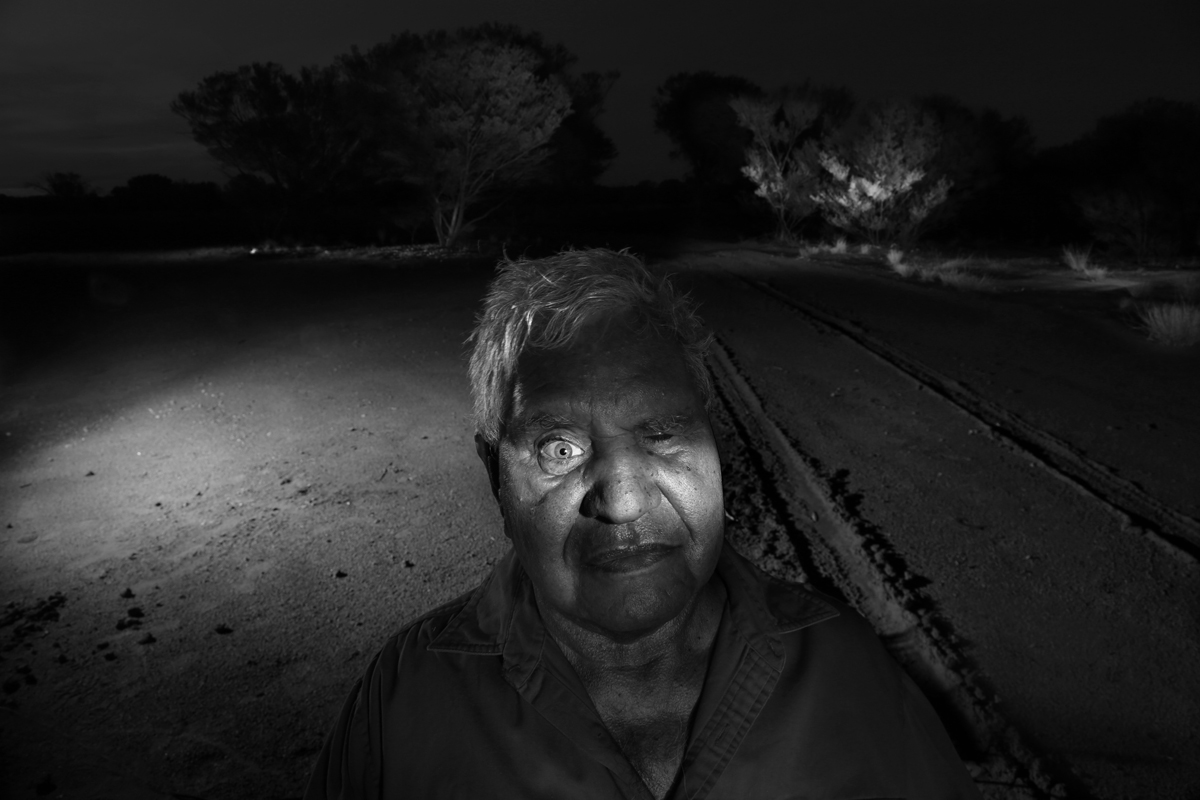 ‘Yami Lester is a Yankunyjatjara man from South Australia. In the 1950s, while he was a young boy, he became severely vision impaired by an ominous ‘black mist’ that rolled in from the desert and engulfed his family’s camp. After the mist passed, his family group became violently ill, with vomiting, diarrhoea, outbreaks of severe skin rashes, and vision loss, some of them died. This black mist was fallout from British nuclear tests at Maralinga and Emu Junction. In the 1950s and 60s, the British Government conducted nuclear tests at Maralinga, in South Australia. A total of seven major tests were carried out, as well as hundreds of smaller trials. These tests exposed both the servicemen stationed at Maralinga and the local Aboriginal inhabitants to hazardous levels of radiation. These sites are predicted to remain contaminated by these radioactive materials for hundreds of thousands of years. Yami Lester’s most significant contribution to the rights of Aboriginal people was in helping gain public recognition for the effects of the atomic tests at Maralinga and an acknowledgement of the catastrophic ways Aboriginal people had been affected. Yami’s actions helped lead to the McClelland Royal Commission in 1985, which examined the British nuclear tests in Australia and their effects. The Royal Commission ultimately found that there were still significant radiation hazards around many of the original test sites, and that rehabilitation of the area was necessary. Its recommendations included group compensation for the Maralinga Tjarutja people and an extensive, long-term clean-up operation to restore the land. In 1993 the British Government paid the Australian Government £20 million toward the clean up. In 1994, the Australian Government paid the Maralinga Tjarutja, the Indigenous inhabitants of the Maralinga area, a compensation settlement of $13.5 million. The land where the testing had taken place was returned to the Maralinga Tjarutja people in December 2009. Many still question whether the land is actually yet safe for human occupation.’

Peter Ford was a newscaster at CNN in the United States before inventing the NeuroSwitch. After decades of research and development, and help from Stephen Hawking, Peter’s invention is helping people who had previously been ‘locked in’ to communicate with family and friends, write poetry and books, edit videos, send emails and engage in day-to-day activities that help them feel more connected with the world. He is now the Founder and CEO of Control Bionics. NeuroSwitch enables nerve-based (EMG: electromyographic) control of computers, robotics and other electronic systems for people with Locked in Syndrome and quadriplegia. Peter and Yami are great friends.

‘In the 1950s there was British Government and the Australian Government made an agreement to have bomb testing in Australia. Not far from here. I was only a little kid. They were working there, testing the bombs. The first one when they let it go was called Totem 1. We heard it here, loud and clear, and felt the ground shake. We seen the radiation fall out over our camp. It was moving very quietly and very deadly. After that I went blind in the right eye straight away and on the left I had some sight left.’