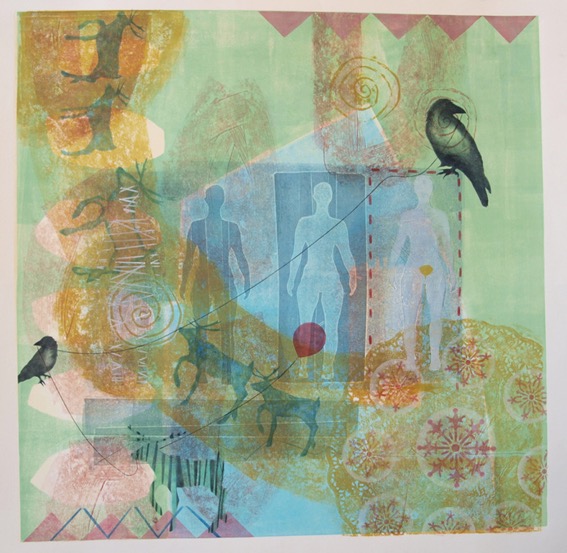 I was born in 1966 and growing up in Skjervøy in North Troms. My father’s people came from Kjøllefjord in Finnmark, where they as coastal Saami lived by fishing.

I moved to West Finnmark in 2005, where I settled myself on a little spot on the coast, Snefjord in Måsøy municipality. Snefjord is 37 km from Havøysund, which is our community center.

Alice in Lewis Carroll’s Through the Looking Glass is suddenly in the mirror. When she glances at the real world on the other side of the mirror, it seems boring and unattractive. Mirror Universe is messy, but the impressions which are much more intense and vivid. The perspective is in constant motion. Dead objects are very much alive and acting in strange ways. Alice in her naivety sets never question the absurdity that is around her.

To see the works of Hanne Grete Nilsen Einarsen’s like to fall into such a mirror. The naive and absurd toys with the urgency of a distinctive perspective, the motives can not always catch the framework, the abstract and the figurative dance effortlessly on each other.

Hanne Grete can not limit the frames. A work consisting of small square units often supplemented with a cloud or a fish bowl on a pedestal. Painting surface rupture of the three-dimensional element. The details are playful and humorous, almost absurd.

She works in series in which the individual works hang together like puzzle pieces. What at first glance, tying the series together is the technique and theme, but on closer inspection one sees that the individual parts are just that: share. In some cases, puzzle pieces literally, canvas to canvas, the forms work. In the second series of images can be perceived as independent entities, but they get their full meaning only when they experienced as part of the whole they are made for.

Her work shows a diversity of what the technique is concerned. Each series has its engineering and cover a wide spectrum: oil on canvas, pastels, prints. She also combines different techniques. One such example is a series created through a combination of depth pressure (metal press) and woodcuts, which she eventually painted over. She also creates pressure on his records to the new artwork, through to mount them on frames and racks.

The series differ from each other, but there are nevertheless some common features that may exist across them. The design often built around geometric elements, it is a touch of naivety in the design of the motives and the perspective is skewed, almost moving. The works seem to be structured around the contradiction principle. The deep seriousness that can be seen in the story behind one of the series is in stark contrast to the soft, pastellkrittet she has chosen to express themselves through. Fun and comedy acts together with seriousness and depth. It hurt the strength. Joy with grief. Such contrasts appear in the tension between subject and technique, but also within subjects.

When she longs, she creates house. Hanne Grete has many houses in many types of landscapes, some cheerful, others sad. All crooked. All the way one would expect to find houses and landscapes, at Alice’s side of the mirror.
Linda May Call Stone

“I am a Indigenous artists with sami roots. I live in the north of Norway in a small village called Snefjord. I work with paintings, printing and drawing. The artwork is made in the technic of printing in monotypes.They are in size 70x70cm.

I am a trained artist from the Academy of fine Art in Bergen and in addition to my art, I take a lot of photos.  I am a storyteller and I use symbols and colours in my visual voice to convey my expression. All my pictures are made in my workshop in Skavika in Snefjord.”