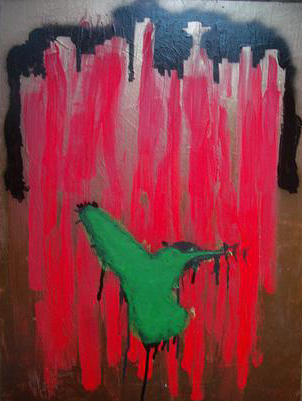 “Heart Centre represents the beginning of the in-depth internal work I have been doing in my healing journey of PTSD. I have been undergoing somatic therapy for the last four years. Somatic healing is something that has entered my life due to the severity of intergenerational childhood trauma. What I experienced as a child is not uncommon to Indigenous people in Kanata (Canada), as well as to the rest of Indigenous peoples across the world. It’s a global obstacle. Moreover, this type of deep healing work has brought me to so many beautiful things’, however , as difficult to shedding these old conditioning patterns, what has surfaced is an increase of self-awareness and my ability to take better care of myself. This has also shaped and transformed me into enriching everlasting relationships. These new beginnings, has never felt so beautiful. It took me quite a while to get to my heart center. When finally getting through what was blocking my authenticity, soon thereafter my personal truths revealed. Such as being an artist, being a healer, a teacher, a musician and, the list goes on. The continuation of this work has been snowballing ever since. Every session now, calls for me to go to my ‘heart center’ and so the learning continues to expand. Having said that, this is why my ‘Heart Center’ art piece was so important for me to do. This was just the beginning to the many unfolding of beauty that lies ahead.

This body of work is a series of six titled ‘Concrete Jungle’. Concrete Jungle portrays my experience as an urban Native person. Living my life in many worlds. One living and finding culture in the city life style as a Native person, as a two spirit, being a woman and, how all of this plays into my identity in the modern context today. The symbols of this piece, do not change the fact I am connected on the spiritual level. The feeling I felt when doing this, reminds me I am still just as valuable as if I were to have been raised on the reservation or if I had been just as connected to my culture from birth. I found my way into culture when I reached of age into young adulthood. With all the obstacles that get in the way, it has not stopped me from living the life I am meant to live.”

Margaret Briere is a contemporary Indigenous visual/ performance artist from Shíshálh Nation. Margaret was born and currently lives on traditional unceded Lekwungen and W̱áneć territories.Margaret grew up in the urban setting, which drives her art. She began developing her artistic talents through singing and playing music at an early age. She has been in group and solo exhibitions, like Red Erotic collections 2010, the 150 Years of Resistance Art Show at the Anarchist Book Fair in 2011, followed by showing at Camas Book Store in 2013. She has also expressed her creativity in musical theatre at Groove Fest in 2005, which followed into doing Theatre for the Oppressed in 2005-2006, queer scene drag performances, and then she finally found her voice, learning to sing at a cultural level in traditional pow wow circles. More recently, she began to make prints and enjoys selling them at events.

These varied art experiences have shaped Margaret to better understand her life’s direction. Margaret’s overall philosophy as a contemporary Native artist is to nurture her identity as a shíshálh (Sechelt) two spirited person. She also feels the importance to present community with honest, raw, and thought-provoking Indigenous works of art aimed at influencing communities and young people. She believes the way she presents her work will ripple effect wherever necessary.  She notes, her truth, “My connection to practicing art comes from the spiritual connections that I embody, I am able to transfer that to my work.” Margaret currently enjoys painting and drawing by using acrylic, tempera paints, spray paints and using ink and is open to expanding on using more mixed media’s.  Her unique style and finished products usually encumber vibrancy in a poetic structure because they overall resonate with how eurocentricism and colonization has impacted her identity. Learning about how colonization impacted her personally, this has become a major theme in how she enjoys expressing herself through art. Margaret believes growing as an artist because her creativity helps release and processes her life in a positive and healthy manner.

Margaret’s specialty is highlighted when she is charismatically inviting the viewer’s experience through her creativity; in this she possesses a powerful skill.

“These art pieces that I create are inspired from my deep thinking and emotional processes. Art does this for me. This is the only way that I can truly speak the language I need to express with the world. This helps me give powerful messages without having to over explain through words.”