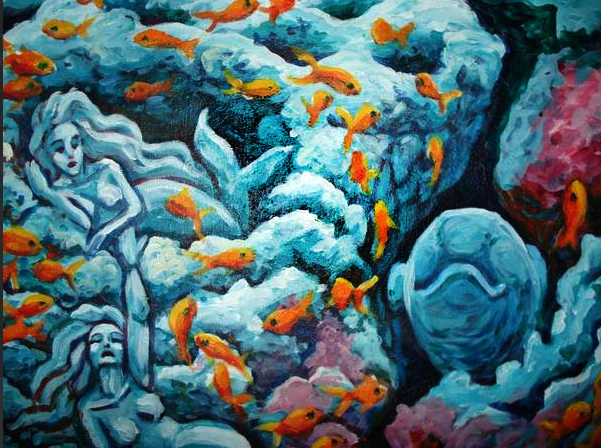 Matthew Kaopio, Jr. was born in Kailua, Hawaii on April 28, 1972. Since childhood, he enjoyed art and drawing. On August 17, 1994 his life was forever changed as result of a swimming accident that left him severly paralyzed as a C-4 quadriplegic. He was 22 years old. Kaopio says he was devastated and depressed, feeling like he would never be able to draw or paint another picture again. But while recovering at the Rehabilititaion Hospital of the Pacific, Kaopio was introducted to mouthpainting by MFPA student member David Kaaihue.

Although frustrated at first, Kaopio worked hard and found that painting helped him regain strength and confidence as he received positive feedback from those who viewed his paintings. Determined and eager to test his limitations, he returned to college to earn a Bachelor’s degree in Hawaiian Studies and a Master’s degree in Pacific Island Studies.

Matthew Kaopio, Jr. has been painting consistently since 1997 and has had his work in several exhibitions, including a painting that was selected in Hawaii’s “Artists of Hawii” exhibit in 1999. Matthew now resides in Ewa Beach.