Pedro Miranda – EVENT ON THE STAIRS 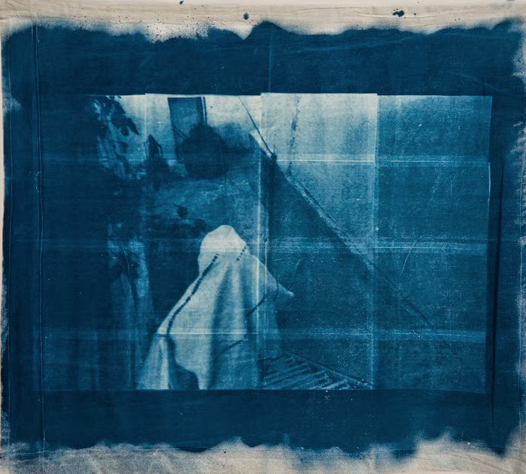 “In 2013, in a talk with Marcela Taboada precisely these pictures came the idea enlarge and print cyanotype, a technique used by Anna Atkins , who illustrated encyclopedia botanical using the cyanotype, and thus becoming the first woman photographer in the world.

At the time Alelí was a great friend as well as being a model for various artists, and this was the reason why I decided to make this photographic series. Cyanotype + Alelí = women who have shaped my career: Miriam Ladron de Guevara , Ephemeris on the ladder for me representing the female force despite the force often appears not to be lost in the shadows of men to women driving.”

Pedro Miranda  (Oaxaca, 1982) took up photography in 1999, under the tutelage of Marcela Taboada, Patricia Cerezo, Ivan Césarman and Mauricio Mendoza. He is a disciple of the sculptor Miriam Ladron de Guevara, who was formed between 2001 and 2004. He has participated in several workshops for making textiles rack, paper with natural fibers and ceramics.

In 2011 he was one of the artists presented by the Arte40 collectively exhibited at the National Museum of Art, Mexico City. That same year he participated with Montserrat Jimenez and Julio Godefroy in Shock TVUNAM Arts program, with the “sensory Images”. In 2010 he developed  the crazy girlfriend  thanks to a grant from the Ministry of Culture of Oaxaca. With this series he presented his first solo exhibition in Mexico City in 2013, the Alternative Space Gallery of the National Arts Centre.

“In the late nineties, while sharing Alelí house, took my first pictures in basic photography workshops to those who attended.

On one occasion, Alelí collaborated with me on a photographic series in black held on the steps of my house to practice what they learned in the workshops and the use of photographic laboratory and white.

These pictures were saved, like many others in my file which it considered an exercise and not something to display.”